skip to main | skip to sidebar

So I signed that Uber petition the other day; basically telling New York City that I support the idea of them leaving Uber the fuck alone. Apparently everyone who signed got a response (probably automated) from Tony Shorris, the First Deputy Mayor (whatever that is).

After the jump is the Mayor's office's propaganda email, and my obviously hilarious response! Enjoy!

Here are some of my contributions to Inktober 2014 so far. More to come! 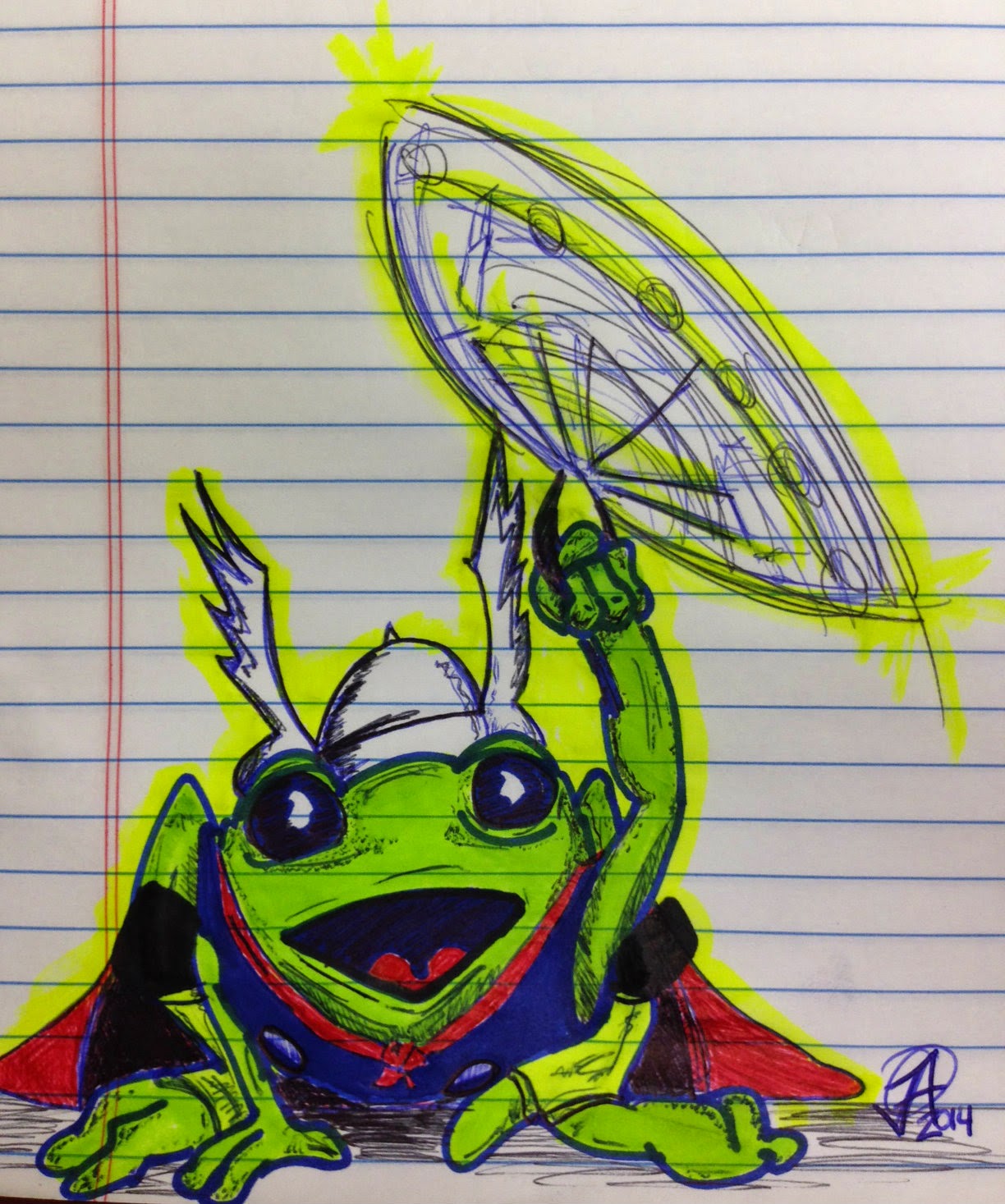 This first one is of Frog Thor. Yes, for those that don't know, Thor was a frog once. I'm not gonna explain it, but it was awesome. This was all ball point pen and highlighter.
Read more »
Posted by JoeyESQ at 5:47 PM 1 comment:

So now that I'm no longer perpetually dissatisfied with my own artistic ability (see what I did there?), I've decided to post some of my artwork here on the blog for your viewing pleasure!
This one is a piece I did for Sketch Lottery back in May. 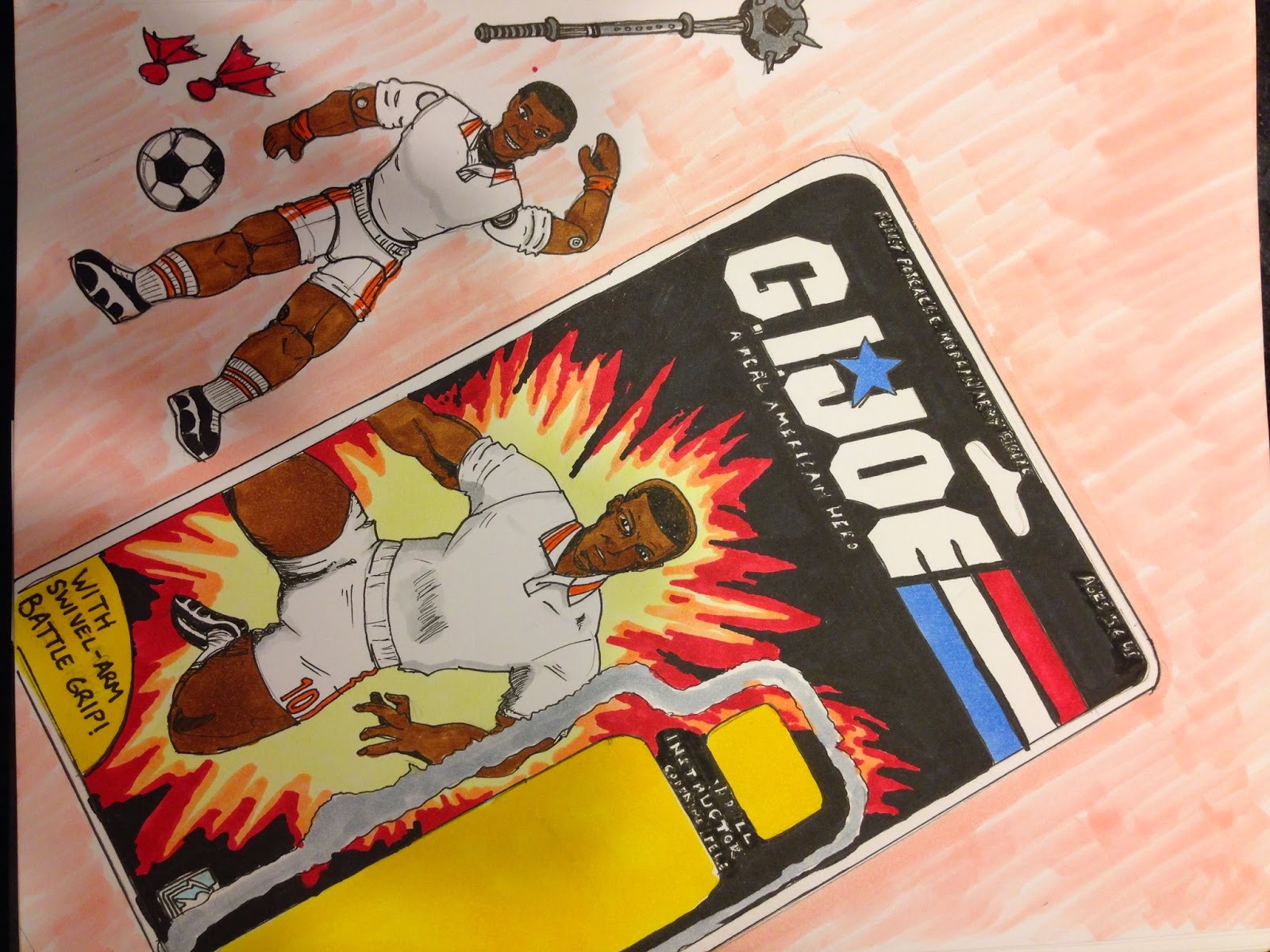 Our assignment that week was Pele', obviously. I found the subject kinda boring, given that I'm not a sports guy in general, and also American, so Soccer is irrelevant even if I was. So I made it fun by  adding my own spin to it and making Pele' a member of the G.I. Joe team... Like William "the Refrigerator" Perry and Sgt. Slaughter before him!
Taking my cue from The Fridge, I gave Pele' a spiked soccer ball on a stick. I also gave him a real soccer ball, and two red flags, all of which are undoubtedly explosive.
Observant geeks will note that the uniform Pele is wearing is actually the one he wore in the Tang ads that ran in all the 80's comic books.  Which means the version depicted above is probably the variant "chase" figure. The regular version wears Pele's traditional uniform, and comes with yellow flags that are filled with knock-out gas, as opposed to the red explosive ones.

Passing Notes Is My Favorite Pastime...

If you've read anything I've ever written, you know I've made no secret that, pre-2000ish, I was beyond clueless when it came to the mysteries and secrets of the female species. I mean, naiveté isn't even in it; when it came to girls, I took being dense to a Rembrandt-level art form. I was the Beatles of obliviousness. But I wasn't always that way...  Read on after the jump!
Read more »
Posted by JoeyESQ at 5:37 PM 2 comments:

Am I The Only Nerd Who Gets Annoyed...

When they change stuff in the comic book to make it match the movies? Ok look, I understand the corporate robot-think that leads to comic book companies doing this, but I find it contemptible and I'll never agree with it. And that's not just nerd-rage talking, the way I see it, its a really shortsighted and stupid thing to do.
Read more »
Posted by JoeyESQ at 5:28 PM 1 comment:

A Douchey Thing I Wrote On My High School Notebook

"Only when the last tree is gone, the last river is poisoned and the last fish is caught, will man realize that money cannot be eaten"

Well, WrestleMania 30 has come and gone and as I sit here writing this I have to say, I was definitely satisfied. In fact, I thought the show was great. Earlier in the weekend I said that I hadn't been this excited for a WrestleMania in probably 10 years. Turns out that's fitting because also haven't been this pleased with the results. Until this weekend, it's been 10 years since I've truly enjoyed being a wrestling fan. Sure there were bright spots between then and now, but for the most part I've found the WWE to be stale, boring and disappointing since WrestleMania 20 closed with two of my favorite wrestlers celebrating in the ring, both world champions, both having reached the pinnacle of their sport.
WrestleMania 20 was at Madison Square Garden. I was there, and getting to see Chris Benoit (one of the aforementioned favorite wrestlers, before he turned into a monster) beat HHH clean in the main event to become the World Champion will always be one of my fondest memories as a wrestling fan. In fact, until last night, that was probably my LAST fond memory as a wrestling fan*.  It makes sense then that the end result of WrestleMania ten years later has a lot of similarities. Daniel Bryan went over not only HHH, but also Randy Orton and Batista later in the night to finally, conclusively, become WWE World Heavyweight Champion.
*Ok, maybe the two ECW One Night Stand pay per-views briefly interrupted the ten year streak of indifferent disappointment, but considering how WWE's version of ECW turned out, I still maintain that WrestleMania 20 was my last fond memory.
Read more »
Posted by JoeyESQ at 3:12 PM 1 comment: